Thousands of small businesses and corporations rely on the Drupal content management system to power their websites. It’s easy to see why this open-source platform has become so popular. It offers users the ability to create engaging, dynamic websites that are scalable enough to grow with the business.

And help support their online marketing efforts (including e-commerce). If you’re thinking about building your next website using Drupal, here are five reasons why Drupal theme development is so popular among web developers and site owners alike.

Drupal is a Content Management System (CMS) that allows you to create and publish content on the web. It’s written in PHP and released under the GNU General Public License (GPL). The CMS can be used by both individuals and organizations to power interactive websites.

Drupal powers millions of websites all around the world, including a number of high-profile sites like Whitehouse.gov, eBay, Starbucks, Amnesty International, Coca-Cola, and more. Due to its versatility and ease of use, Drupal is one of the most popular website-building platforms on the internet today.

Below are top reasons why Drupal theme development is getting immensely popular. If you want to secure expert Drupal web development services, you must hire reliable Drupal developers.

One of the things that makes theme development in Drupal so popular is its ability to be customized and changed on the fly. Due to the popularity of this CMS, there are plenty of themes to choose from, with more being developed all the time.

This means you’ll be able to find a theme that suits your needs without needing a web designer. Because it’s so customizable, Drupal can work for just about any type of website, small or large.

The first reason that Drupal theme development is so popular is security. With a site built on WordPress, hackers can easily find and exploit flaws in the website to gain control of it. A site built with Drupal, however, doesn’t have these issues because the code behind the site is not public-facing.

This prevents hackers from getting into the back end of your website.

Many people who use WordPress often complain about how inflexible the software is. When they want to change anything about their site, they are met with restrictions that keep them from making any changes at all.

As soon as you log into a Drupal website, though, you will be able to make changes without any limits or difficulties whatsoever!

Computer World magazine reported that the biggest reason people use Drupal theme development for their blog or website is because of its open-source engineering. Since it’s open source, programmers are free to make changes were needed – even if this means altering the code.

The baseline Drupal code doesn’t do exactly what you need. No problem! Your Drupal designers can easily modify the existing code by adding new features. And fixes so you won’t have to worry about breaking any laws.

As published on Marketing Tech Blog, Drupal enjoys a constantly growing network of developers who are dedicated to perfecting the functionality of this open-source CMS platform. This large developer base has led to more than 5,000 custom-built Drupal modules and updates every 36 days.

This dedication to updating has also made Drupal 8 one of the most anticipated releases in recent history; slated for release later this year or early next year.

Unlike other content management systems developers, Drupal regularly holds huge meetups around the world. At these gatherings, marketing professionals, designers, and themes come together to talk about how cool it is to use Drupal for building websites, where they’d like to see development go next – all this good stuff!

The Drupal development team gathers feedback on what could be improved or added through conversations with people who are using the system (like you!). 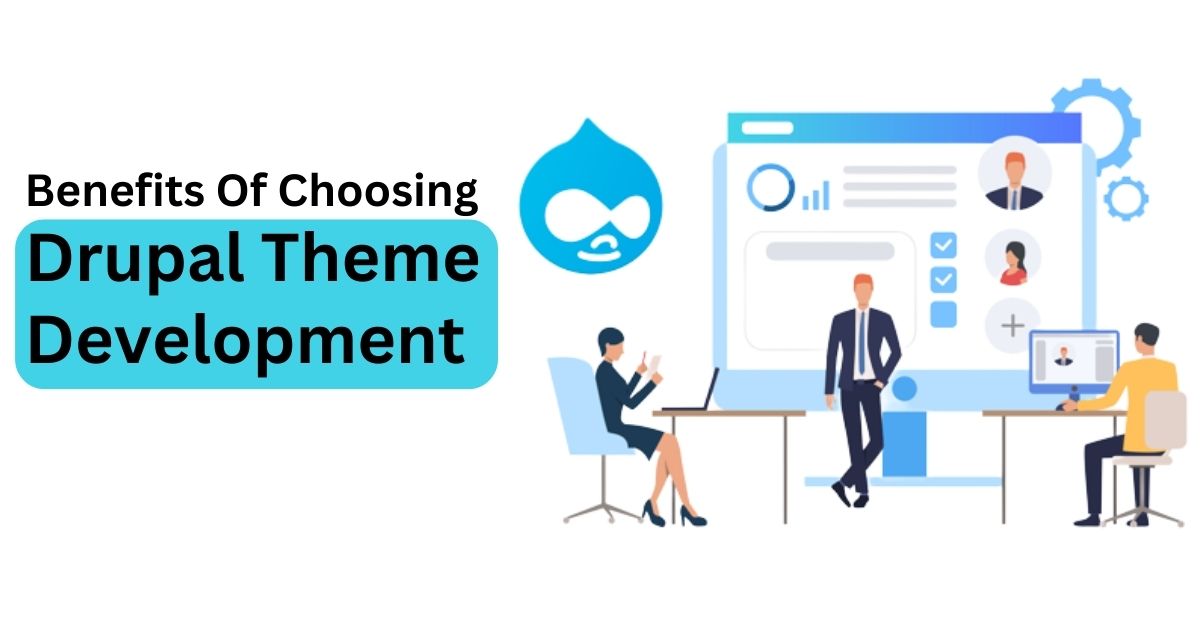 1) The CMS allows for a lot of customization, which lets you create a website that reflects your company’s identity.

2) It’s user friendly, meaning it doesn’t require a large time commitment to learn how to use the system.

3) It’s compatible with most browsers and devices, so the content on your website will look the same whether someone uses their laptop or mobile device to view it.

4) With Drupal Theme Development, you don’t have to worry about having expensive developers on your payroll.

5) With Drupal Theme Development, there are already pre-built templates for whatever type of website you’re creating – so it’ll save you even more time and money!

Drupal theme development has a lot of benefits for both the person building the theme and the end user. The themes themselves are made to be customizable and open source, making them great for people looking to create their own site from scratch or update an existing one.

A huge benefit of Drupal 9 development is that it can easily be done with any level of technical expertise. If you’re still undecided about getting into Drupal Theme Development, you should connect with a Drupal development company to get a complete understanding.

This powerful and customizable system can be adapted to fit whatever a client needs at any time with its constantly evolving software and frequent user involvement. Nothing can compare to Drupal – because it’s just that good!

What are Drupal themes?

In Drupal sites, these elements are used to make the site look how it does. Themers, or theme developers, use HTML, CSS, JavaScript and other front-end assets in order to implement a design for their site.

Each individual theme is a collection of files that defines the presentation layer for your application.

Yes, Drupal themes are all shareware and need to be paid for before you can use them.

Drupal is a secure & renowned open source content management system used to build anything from a personal blog to an enterprise website. Drupal offers a wide array of features. It is the first choice for developers and designers to build engaging themes. To enjoy success Drupal theme development gives you an array of opportunities in terms of SEO optimized and mobile friendly website. You can build your own custom Drupal theme to engage your customers with minimum operational cost.

There are two popular ways to build Drupal theme as mentioned:

It is important to have proper knowledge of PHP, CSS, & JavaScript to create Drupal 8 and 7 themes.

• Create a folder in the /sites/all/themes directory.

• Name your folder in lowercase.

• Describe the site details in it using text editor like Notepad.

Add the CSS and Js files mentioned in themename.libraries.yml. You can consult Drupal 8 developer to design it in your own unique way.

The code just sets the content background color, width, and margin of the navigation bar and many more. It is all about styling the text of sidebars, footer, & navigation bar. You can offer unique touch to multiple elements of content via a stylesheet. You can even add more style sheets as per your requirements.

If you want, it is easy to copy the main PHP template files into your theme folder and customize as per your need. These files include:
• page.html.twig
• node.html.twig
• block.html.twig

That’s it. Now, you have your own custom Drupal 8 theme.

First of all, select an appropriate CMS platform as TemplateToaster supporting almost all the major CMSes. Simply download TemplateToaster and start using it. If you want to build Drupal theme, choose the ‘Drupal’ from the window throwing choices for diverse CMSes as mentioned below:

• Once the CMS is selected, you will be told to go from scratch or with a sample template. You can choose ‘Start from Scratch’.

• Next, select the color and font typography from the given window and click ‘Start’.

• After selecting start, this leads you to the main interface of the software.

In the starting, it is essential for Drupal web development to select the web page layout. Here, multiple options are present including Single, Double, and Triple layouts. Make sure to select as per your design. Here, to show all the sections, Triple layout comprising Menu, Header, and Footer is selected.

• From here, the actual Drupal theme design is start. First of all, design Header. Open the Header tab and choose the ‘Full Width’ for a header.

• For existing Business theme, the height of header from Header→ Height→More options.

• Select a Background Color from the ‘Background’ option for the header. A gradient can be set as well according to your preferences.

• Now remove the Website Title and draw a text area to put the contact details as email id and phone number. Set the typography of the text as required from the editor tab that opens when you click on the text area drawn.

• At the right corner of the header, place the ‘Social Media Icons’. You can browse custom icons from the ‘More’ section. You can also place the Website Title and Slogan if you require as all the options are present here.

• You completed designing of the Header part.

Next section is Menu. Move to the Menu Tab. Make it ‘Full Width’. You can also set a custom width or width equal to the page as per your preferences.

Step 5: Designing Body of the Page

The content is placed after exporting a theme. Only you can set the typography of all the elements including headings, paragraphs, metadata, Meta links, tables, and comment form to be used in content.

Drupal Theme Development is an important phase of Drupal website and it requires proper expertise. Thus, to avail of desired business results hire Drupal developer from a reputed agency with appropriate resources. They will provide multiple solutions to meet your business requirements in a streamlined manner.

1. What is the purpose of Drupal?

Drupal is free, open source software that can be used by individuals or users having less technical knowledge to easily create and manage different types of websites. The application includes a content management platform and a development framework.

2. What language does Drupal use?

Drupal is PHP based language and every developer needs to know PHP language for any development or customization work. The reason for using PHP is it is a programming language that is flexible and simple to learn, even if you come from a different knowledge background.

Drupal is a free, open-source content management system (CMS) having a big and supportive community. It’s used by millions of people and organizations across the globe to build and manage their websites. Government websites are also Drupal built as they demand advanced security and flexibility. Drupal is free to download and with simple modification the platform can be extended.

4. Is Drupal front end or backend?

Drupal is not just a frond end or backend. It is a CMS to manage your content with inbuilt template engine. Even Drupal can be used as service to store the content and use some front end tools for displaying content.