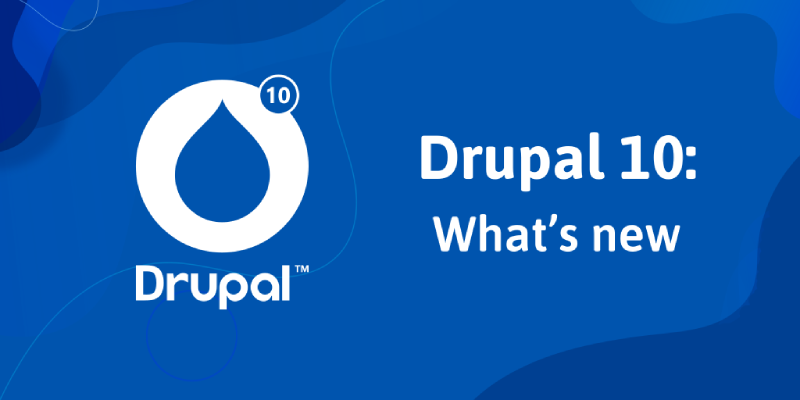 It might sound weird to you that we are talking about Drupal 10.

Especially when Drupal 9 released this summer and we discussed a great deal of updates and features about it. And, you might be in the process of Drupal 9 development or have completed the same.

But, as you know the technologies do not wait for anyone and keep on upgrading every now and then.

Similarly, an all-new version of Drupal 10 for Drupal web development is slated to release in June 2022, i.e. next year with possible upgrades.

So, here, in this blog, we let you prepare about the latest version of Drupal CMS before, you find it too late in 2022 to get complete information over it.

Here’s how to know more about Drupal 10 and prepare for it ahead.

Why So Fast about Drupal 10 Development?

If you ask yourself this, “Are you ready for Drupal 10?” then it might sound like a strange question. It is because, a few months earlier, we talked about the latest Drupal 9, what’s new in there and why do you need to update?

The reason why we are talking about Drupal 10 because new releases do not wait for anyone. And, it certainly takes time to understand the new updates and migrate from the previous version to the latest version.

Drupal 9’s first alpha release way back in October and since then preps are on to develop Drupal 10.

Another major fact to notice that there was a transition period of four and half years between Drupal 8 and Drupal 9. Now, it will only take 2 years of time to get the new update from Drupal 9 to Drupal 10.

Of course, there is still time for you to avail Drupal migration services and get your CMS upgraded to Drupal 10. But the only thing you do now is finding the latest updates of the new CMS that will go in full swing from June 2022.

1. Symphony: Drupal 9 released Symphony 4.4. However, it has some Symphony 4 deprecations to deal with. Its up-to-date version will be Symphony 5 and is adding its own deprecations for Symphony 6. With the latest release of Drupal 10, you can expect to have Symphony 5 or 6.

2. CKEditor: The version CKEditor 4 will be out of place in 2023 finally. Its place will be taken over by CKEditor 5. According to the CKEditor team, it will be an entirely new and modern editor. Those who upgrade to Drupal 10 from June 2022 onwards, will get the substantial benefits of CKEditor 5 along with new bugfixes and new features.

3. Guzzle, Twig, & More: Both Guzzle and Twig released recently. But as time passes by, there arise the requirements of new features and upgrades. So, to meet the same, Drupal 10 will be available with updated versions of Twig and Guzzle altogether.

Things to Expect from Drupal 10

There will be several additions to Drupal ten, some of the prominent ones are mentioned below:

* Improving Drupal’s out of the box experience.

* There will be the addition of a new Olivero front-end theme as a default feature of the Drupal core.

* It will start introducing JavaScript components.

Top Advantages of Drupal 10 to Expect

* It will simplify the maintenance and process for developers.

* It will focus on platform components and stability.

* It will improve the overall advances in Drupal 9.

There is always something new and updated available in Drupal and enterprises need to be a part of it. Just to offer a seamless product/service experience, handling content, and managing the website in a hassle-free manner. Also, for Drupal ecommerce development, Drupal 9 is the best platform and then upgrade to Drupal ten accordingly.

Get more information on Drupal CMS, its latest versions, upgrades, and services at Drupal India.

Drupal is one of the best-acquired content management systems for retailers to start with a profitable eCommerce platform. There are various versions of Drupal that have been implemented out of which Drupal 9 is the latest one and Drupal 10 is slated to release in June 2022.

Yes, once there will be an end of life of Drupal 9 and you no longer get technical support of features, security, and from the developer’s community. It will be mandatory for eCommerce platform owners to migrate to Drupal 10 when all the updates and support ended for Drupal 9.

3. What Would Be Cost Estimation of Drupal 9 Migration?

The cost of migration from the current version of Drupal or any other CMS to Drupal 9 is estimated according to various standards. The nature of business, size of the platform, number of products, complexities, resources, and several other points are considered before deciding the final price.