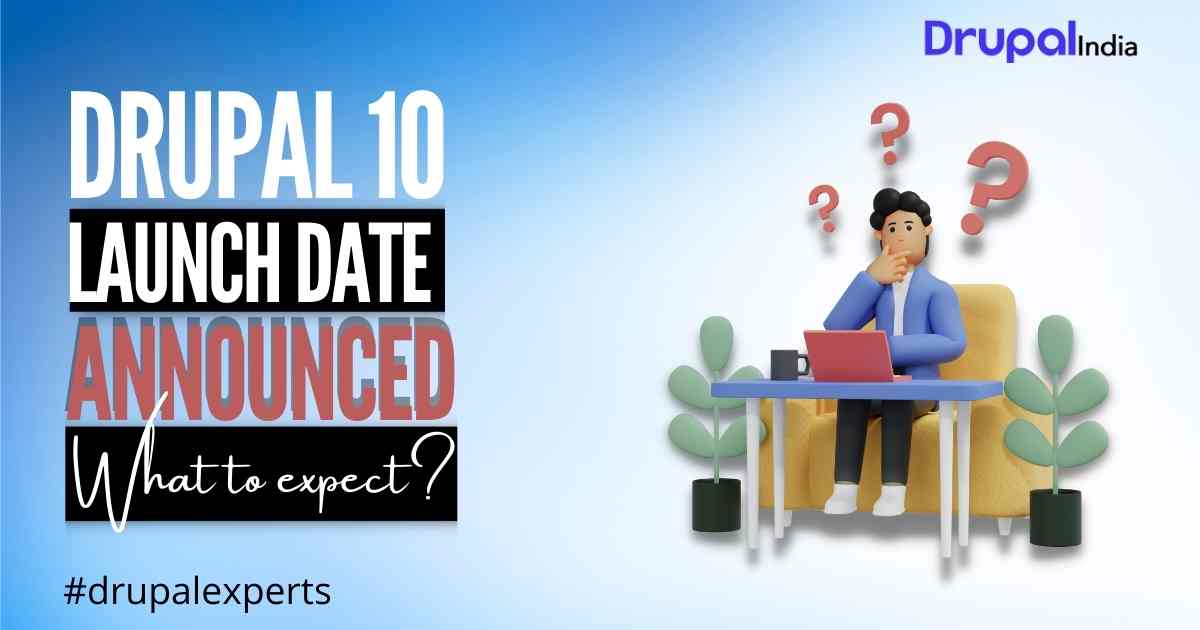 In today’s dynamic digital landscape, businesses must offer web experiences that are more appealing, better performing, feature-rich, and more secure. Fortunately, there’s an effective way to keep pace with the fast-paced digital world; Update your content management system (CMS) to its latest version. If you’ve invested in Drupal website development, then here’s an update for you. With the release of Drupal 9 in the second half of 2020 and the buzz around the release of Drupal 10, the mid-cycle release timeframe can be a mystifying time for some organizations. As the Drupal 10 launch date has been announced, which is December 14, 2022, and details have become clearer, Drupal India is here to answer all your queries related to the release of Drupal 10. We’ll discuss the latest updates shipped with the Drupal CMS and how to prepare for Drupal 10 migration or upgrade. So, keep reading on!

But before we jump into the topic, here’s what you need to know and do if you’re running your website or application on the older versions of Drupal.

Things to Know and Do If You’re Using…

Since the official support for Drupal 7 will end in November 2023, you must upgrade to Drupal 9 as early as possible. Drupal 9 upgrade will probably be a complete website refactoring. Drupal website development as well as the possible migration of content should be planned and budgeted in consequence.

As Drupal 8 is not receiving official support since November 2021, it’s high time that you should upgrade to Drupal 9. This upgrade is not so expensive and does not affect editors and visitors. Therefore, you should not delay anymore for Drupal 9 migration or upgrade.

The upgrade involves updating CKEditor 4 to 5, as the data generated with CKEditor 4 may not be compatible with CKEditor 5. Therefore, you should prepare to ensure a smooth transition without any data loss.

One significant change is that the upcoming Drupal version is built within the current version. So, by the time the Drupal 10 is launched, Drupal 9 will be closed to the new version, if the minor changes have been made. If you are already relying on Drupal 9 development services and solutions, it would be much easier to migrate to Drupal 10.

As a renowned Drupal web development company, we are here to make your Drupal 10 migration smooth and secure.

Drupal 10 is scheduled to be released on December 14, 2022. While we all expected its release in June 2022, the new December date demands more work on upgrading the new CKEditor 5 and shipping Drupal 10 with optimal technical specifications.

We will also see the release of Drupal 9.5 in December 2022. This will be the last release for Drupal 9, containing most of the new Drupal CMS features. One significant difference is that Drupal 10 will eliminate all of Drupal 9’s deprecations. Hence, the project owners can iteratively upgrade their custom code for the new Drupal version. Then deploy these updates to their Drupal 9 production websites, instead of rebuilding all in one go.

If you want to try it out, then there is an alpha3 release available for testing and development purposes.

What Do You Get with the New Drupal 10 Release?

The availability of state-of-the-art Drupal CMS features is the main reason why organizations prefer to invest in a Drupal development agency. So, what to expect from the new Drupal 10 release? The latest features and methodologies continue Drupal’s progress toward a simpler and modern experience for its users.

Most of these features are present as a whole, or partially, in current and future Drupal 9.x version releases. This makes the overall Drupal 10 upgrade simpler and less disruptive for your development teams.

Drupal 10 will be based on Symfony 5.4, however, this version is already getting ready for version 6. Therefore, you need to use PHP version 8.1 at least for the new Drupal version. Besides, the look and feel of the frontend and backend will also change significantly. Drupal 10 is designed to be simpler and more accessible for its users. It will look more modern and will allow for greater expandability.

Project owners and developers will also get the new starter kit theme, which will dramatically change the template building approach, compared to Drupal 8 or 9. The new version of Drupal will also receive refreshed JavaScript components, which will remove jQuery UI.

The old Seven theme, designed in 2009 for Drupal 7 and slightly revamped in Drupal 8, was preventing new users to use them as it gave the impression of a time-worn system. Drupal 10 will replace it with the Claro theme. This theme is designed according to the latest standards, and adjusted to unlock the full potential of the latest Drupal CMS features.

Both the frontend and backend will get a new modern look. The Olivero frontend theme will leverage the capabilities of the new system and support functionalities that users love, like the Layout Builder. The theme will also be WCAG AA-compliant.

As compared to Drupal 8 or 9, the approach to template building will change significantly. With the introduction of the new starterkit, there’s no need to extend the basic theme. However, you can hire Drupal developers who can generate a clean template as the foundation for building your theme from scratch. This will help in avoiding getting the entire template which comes with limited update options because of maintaining backward compatibility.

The concept of sub-theming will remain constant. So, developers still can build additional themes that receive the design components from the base theme. The theme generation will be automated and performed by default Drupal scripts.

Drupal 10 will also come with a new WYSIWYG editor. It would not be fair to call it just an update of CKEditor from version 4 to 5 since all the code was written from the ground up. The authors employed a new proprietary data model and architecture, compared to the DOM used in version 4.

CKEditor 5 will also have an extensive API, allowing for numerous opportunities for expansion and integration with cutting-edge technologies such as Angular, React, etc. Also, there will be no source editing mode, recognized by WYSIWYG editors as it does not generate HTML code on a daily basis. And, only when saving, does it converts the content into the code that can be read by browsers as well.

We all know that Drupal is an ideal headless CMS. The Drupal 10 version will introduce changes in this area as well. The introduction of decoupled menus is one of the significant initiatives in this upgrade. It is a functionality that allows you to easily update the menu from the admin panel. Due to this feature, for websites using frontend development frameworks like Angular or React, developers can easily use and avoid implementing minor changes to the web page. Drupal 10 will definitely bring more solutions that will support the application of the decoupling strategy.

The introduction of automatic updates is another significant effort for making Drupal more user-friendly. This feature will include security and Drupal core updates. The expansion of this feature is still under planning to ensure that it also supports minor updates and the updates of contributed Drupal modules.

As compared to other leading CMS solutions, Drupal 10 will come with a built-in module browser that helps you search for and install a specific tool from the admin panel. This feature makes Drupal more accessible to new users. Presently, the Drupal module installation process consists of several steps. In some scenarios, for example, installation using Composer in the command line requires the users to have some technical skills. The module browser will be enriched with plenty of features, intuitive filtering, and anticipated modules that are often used by the Drupal community.

How to Prepare for Drupal 10 Upgrade

Drupal 10 is a refined version of Drupal 9, as stated by the Drupal 10 readiness initiative team. Since March 2020, the team is making endeavors to release Drupal 10 on time without any flaws and glitches.

If you want to upgrade or migrate to Drupal 10, you can always approach a Drupal development agency that offers Drupal migration services as a part of its end-to-end Drupal website development services.

Before migrating to Drupal 10, there are certain considerations you need to focus on. Below are some of the updates from the Drupal 10 readiness initiative:

There are new technical requirements for certain Drupal 10 dependencies. As a project owner, you will want to ensure that your code and hosting environment are future-ready. Drupal 10 will need Symfony 6.2 and PHP 8.1 and will come integrated with CKEditor 5. Therefore, you should focus on ensuring Symfony 6 compatibility.

Remove and replace jQuery UI components used by Drupal core with a set of supported solutions. Rebuild jQuery UI functionality by either using vanilla JavaScript or by using frontend frameworks like React.

Follow the best practices for deprecating modules, such as naming, versioning, leaving wrappers or not, uninstallation, and more. Introduce a ‘lifecycle’ property that you can use in info.yml files, for both themes and modules.

There’s no exact time when Twig 2 End-of-Life will be. However, whether it is required to update in Drupal 10 or 11, it’s wise to upgrade to Twig 3 now.

The Drupal team will move CKeditor 5 to contrib and receive support from the community. This module needs to be reliable and stable in the previous Drupal 9 minor if you want to deprecate CKEditor 4 before the Drupal 10 release.

PHP 8.1 compatibility is improving significantly. However, it has only two core issues that need to be fixed now. Additionally, PHP 8.1 is in RC3, which makes it quite stable now.

Guzzle has been upgraded to Guzzle 7.3.0. It needs psr/http-client 1.0.1, which is also added as a dependency.

You can implement a new starter kit theme and remove Classy. The starter kit markup and CSS will see changes over time as it serves as a base for themes.

Get rid of modules where the agreement was made and modules were deprecated in the Drupal 9 version.

If you want to stay competitive, you must ensure that your Drupal CMS is up to date. If you’re still sticking to the older versions of Drupal, it’s high time that you upgrade to Drupal 10 to leverage the new Drupal CMS features.

Q.1. What are the themes and modules that will be removed from Drupal core with the Drupal 10 release?

Ans. Drupal 10 will shift some existing core modules and themes into contributed projects to streamline Drupal core and its maintenance. They include:

Q.2. What to expect from the Drupal 10 release?

Ans. Here’s what we can expect from the Drupal 10 release:

Got More Questions?
Feel Free to Contact Our Drupal Experts.

Talk to Our Drupal Experts for Professional Drupal Migration Services.