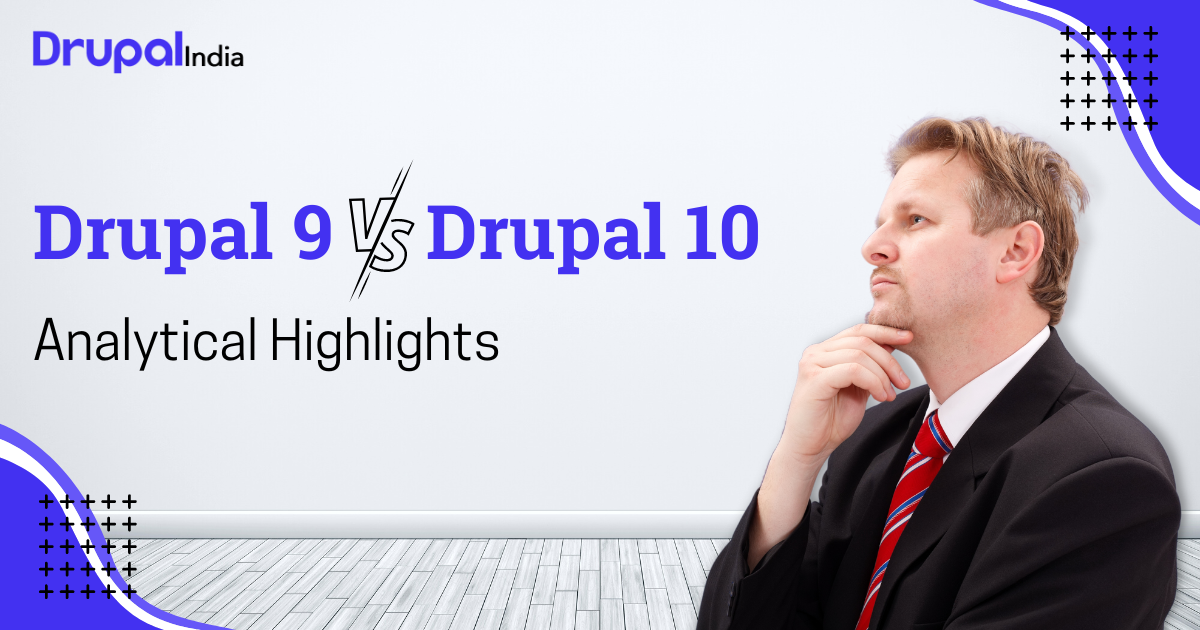 With the release of Drupal 8, in 2015, Drupal evolved into a modern object-oriented enterprise-level content management framework that can assist business organizations in their digital transformation initiatives. Drupal 9, which was released on June 3, 2020, was largely built in Drupal 8 with deprecations and optional updated dependency support. Unlike previous new major versions, Drupal 9 is not a reimagining of Drupal. 3 This is the simplest upgrade of the decade.

Drupal 10, which was supposed to be released in June this year, has been pushed back to December and Dries announced the decision at Drupal-con Portland 2022.

Drupal 9 Vs Drupal 10: Comparison of the primary features

Symfony 4, one of Drupal 9’s most important dependencies, has an end-of-life date of November 2023. It implies that security flaws in Symfony 4 will not be addressed after November 2023. As a result, Drupal must adopt Symfony 5 as soon as possible (or later). Symfony will be upgraded from version 4 to 6.2 in Drupal 10.

Drupal 10 will have the upcoming CKEditor5, with its vastly improved authoring experience and an array of plug-ins. The delay has been caused because more work is needed to integrate it with Drupal 10. CKEditor5 makes Drupal content creation future-ready. It looks a lot more like Google Docs or Microsoft Word. The new contextual balloon is a major improvement in CKEditor5.  This allows editing content online in the editor without having to enter a model dialogue that would interrupt the content creation flow of content creators.

The Starterkit theme can usher in a new era of Drupal theming. It is a new custom theme creation process and base theme in Drupal 10 that will replace classily. It is currently in alpha, but it is on track to be stable for Drupal 10.

Updating Drupal core has been a nightmare for beginners and site builders over the years. It is much easier to update Drupal core via composer in Drupal 9. With Drupal 10, it will be automatic.

Although it was added to Drupal core in 2009, jQuery UI has been unmaintained since 2017 and is listed as an Emeritus project. Emeritus projects are those that the maintainers believe have reached or are nearing the end of their useful life. The Drupal core will deprecate and eventually remove jQuery UI. It is still used in Drupal 9 in a few places.

Drupal is the platform that works, with over 1 million websites running on it around the world. Drupal is used by 70% of universities. Drupal is used extensively by the media to deliver content. Drupal is trusted by governments. Drupal is required for security on finance and commerce websites. Using Drupal, tourism destinations bring their clear waters and mountains to life on screens. Drupal’s prospects as a web CMS will improve with the addition of new features in Drupal 10. Drupal is the foundation for future-oriented marketing.

What is Drupal used for?

Drupal is free, open-source software that can be used by individuals or groups of users — even those lacking technical skills — to easily create and manage many types of Web sites. The application includes a content management platform and a development framework.

How does Drupal 9 work?

Drupal 9 is a cleaned-up version of Drupal 8. It is the same as the last Drupal 8 minor version with our own deprecated code removed and third-party dependencies updated. Most extensions will only need a few changes. Read more about how this is done and what it means.

Major benefits of upgrading your site to Drupal 9

Enhanced performance and security. Drupal 9 comes with even more powerful performance results, including:

Looking to upscale your development projects from Drupal 9 to 10? Get in touch with us!