Know What Are The Skills Required In A Drupal Developer 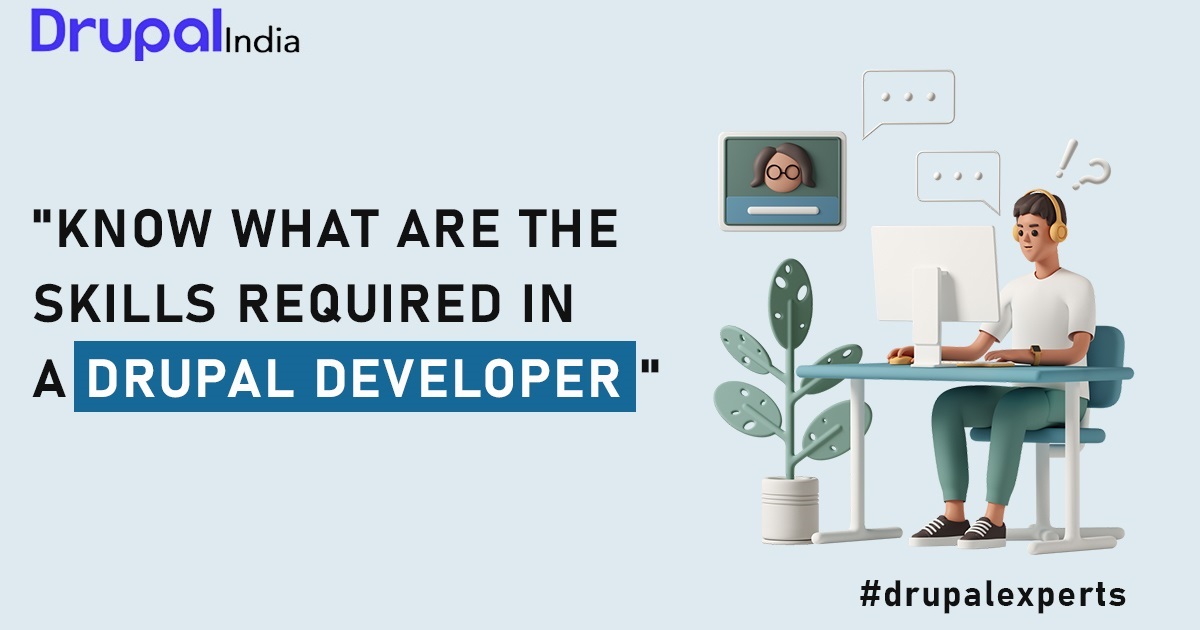 Drupal is a complex content management system or a content management framework that offers great possibilities for both businesses and developers. The multitude of tools and subjects to learn may overwhelm at first, but the Drupal CMS features will reward the developers and programmers with high-end technical challenges in the near future. Also, they can count on the support of Drupal’s ever-evolving community.

Are you interested in becoming a part of this community? If yes, this blog is everything you need to understand as an expert Drupal developer and its job responsibilities.

Who are Drupal developers?

Drupal developers are responsible for building and maintaining websites and applications based on Drupal. Since Drupal is an open-source system, its developers need to master the administration panel inside out. However, their skills reach beyond that because a Drupal development agency is capable of creating dedicated Drupal modules and themes to turn business needs into new features. Also, these developers can combine different types of knowledge and skills.

A Drupal developer is someone who can build Drupal sites with point and click in the admin UI without writing heavy custom codes. However, most of the site/application’s functionalities get derived from Drupal core configuration and contributed modules.

Site builders can experience a wide range of contributed modules to understand how they work together to solve a specific problem. A developer can understand the limitations of modules and provide a concise argument of the pros and cons of varied solutions. Also, Drupal development company can help build the content types, taxonomy, navigation, image pre-sets, rules, and more. One of the most magnificent facts about Drupal is that it doesn’t exclude non-developers.

The Drupal community and the platform provide a potential toolset for people to build innovative and complex sites without the need for a programmer. Mastering this art is a valuable skill in itself.

What are the skills required in a Drupal developer?

There are different skills and levels of experience required in a Drupal developer including various programming languages that involve building and managing a Drupal website. Now, that you know a brief job title, let’s have a look at the technical skills required of a Drupal developer:

Drupal developers must know both PHP and its frameworks. Drupal 7 was created in PHP, along with the version 8 built using Symfony. The latter is a PHP framework that helps build web services, applications, micro services, and APIs. Well-versed knowledge of PHP requires skills like Twig, template engine, and more.

The Drupal experts must also be well-versed with JavaScript, especially jQuery – a JavaScript library that facilitates carrying out a standard DOM (Document Object Model) and AJAX functions. However, working experience with Angular, React, and Vue becomes an asset for JavaScript frameworks as a frontend of the headless Drupal solution

Since Drupal developers have the potential to create websites, they must also know HTML and CSS. The web browsers turn the code of these languages into web pages. A Drupal developer must also work with CSS pre-processors like SaaS and Less. It extends the CSS language with new features to make the styling frontend faster.

Browsers don’t understand the codes written with SaaS and Less, but the developer knows how to use JavaScript task runners like Grunt and Gulp. They can create taxonomies, nodes, content types, image pre-sets, navigation, and work with Drupal APIs. For instance:

The Drupal module is a set of plugins that extends the functionality of Drupal and enables integration with various third-party tools and services. They are offered for free by the community gathered around it. Drupal developers must know how to research, install, and configure modules for a defined project. Also, they must stay well-versed with the ability to build new modules as sometimes meeting customer requirements demand custom solutions proposed from scratch. It means, Drupal developers must know how to create modules using core hooks and module hooks.

Similar to the modules, a Drupal programmer not just configure themes, offered by Drupal community, but also build them from scratch. It helps them validate with a solid HTML/CSS. Custom themes are required as the client may need a unique and complex design for the websites. To meet their expectations, developers must have a solid knowledge of HTML, CSS, and JavaScript operated with a theme layer. Also, they should master the art of implementing responsive designs

1.  Know Everything About Drupal and Google Core Web Vitals

Q.1. What are Drupal skills?

Q.2. Is Drupal frontend or backend?

Drupal refers to a free, open-source content management system (CMS) with a large, supportive community. It is the most go-to-solution by millions of people and organizations around the globe to create and maintain their websites.