How N1ED Library is Helpful to Connect Drupal 8 with Drupal 9? 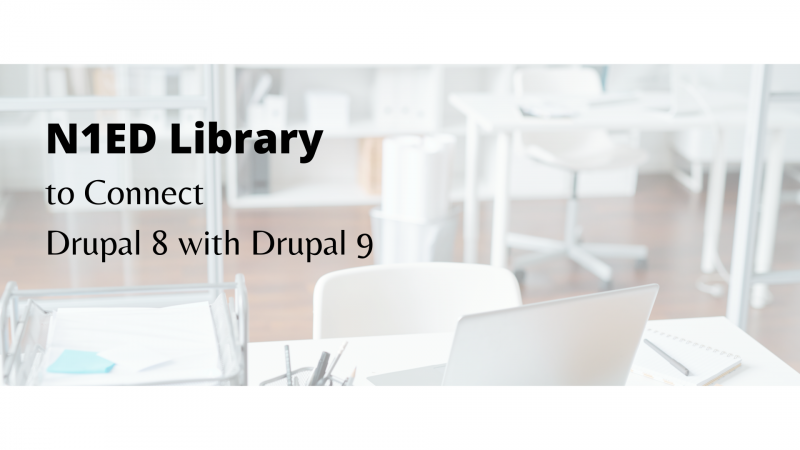 The N1ED module acts as a bridge between Drupal 8 and 9 versions. The N1ED library is a multi-plugin for CKEditor, the basic text editor in this system. The library is based on Bootstrap and its classes. In this blog post, we’ll take a look at it and how it is helpful for Drupal development when creating a bridge between different Drupal versions.

The N1ED library is available in free and paid versions. The former has restricted functionalities, but you can use options like:

Apart from the free version, there are different paid plans available offering additional functionalities. The most engaging one is Bootstrap Editor, thanks to which you can smoothly design what the website will appear in the desktop or mobile version.

Before performing installation, you can check whether the N1ED module works for your website and only then decide if it’s worth investing on your website.

It’s a new module and appeared on Drupal.org in early 2019, but it has already become a stable version monitored by the Drupal team. The first release of the N1ED library was on 18 December 2018.

Popularity of the Module

According to the official stats, the module is highly popular and used by thousands of Drupal ecommerce development projects across the globe. The library can be used in any system using CKEditor or TinyMCE.

Images and galleries, advanced tables, YouTube videos, and other widgets are present without any fee for N1ED users. Developer can also add custom templates to the palette.

You simply work with your Drupal 8 files storage, no special configuration is needed.

N1ED can be included into multiple websites managed by a single Drupal codebase. Or install N1ED on multiple Drupal installations and decide to isolate or share configurations between them. Manage all your configurations from central location and if you are website studio give access to website owners too.

N1ED uses Drupal role and permission model to access features. You can smoothly configure who has authority to storage features with images, who can run N1ED and who can customize its configuration.

All plugins available with the N1ED ecosystem installs smoothly if your CMS is Drupal 8 or Drupal 9. Furthermore, along with the plugin itself you get a full-featured toolset and a process to configure these instruments from the Drupal administration panel. N1ED and other add-ons are created to streamline user experience in Drupal and hold operating principles this CMS users are familiar to.

Although the free version of the N1ED library has very limited functionalities, it offers a new look and feel to add content in Drupal. To implement it in a more optimized manner hire Drupal developers from a recognized development agency. N1ED helps to control the text and elements entered. Both library and the N1ED module are used as part of the Drupal development services.

1. What is a module in Drupal?

A Drupal module is a collection of files containing some functionality and is written in PHP. Because the module code executes within the context of the site, it can use all the functions and access all variables and structures of Drupal core.

Drupal is content management software. It’s used to make many of the websites and applications you use every day. Drupal has great standard features, like easy content authoring, reliable performance, and excellent security. But what sets it apart is its flexibility; modularity is one of its core principles.

N1ED is a multi-plugin for CKEditor for doing level-up of your WYSIWYG editor to page builder it should be in 2021. Despite its huge functionality, N1ED does not conflict with other CKEditor plugins, nor Drupal 8 modules, because it organically integrates to your CMS by means of the official CKEditor API for Drupal.

Bring Innovation in Your Business Operation with Drupal Development Services