Latest Features You Should Include in Drupal 10 Development 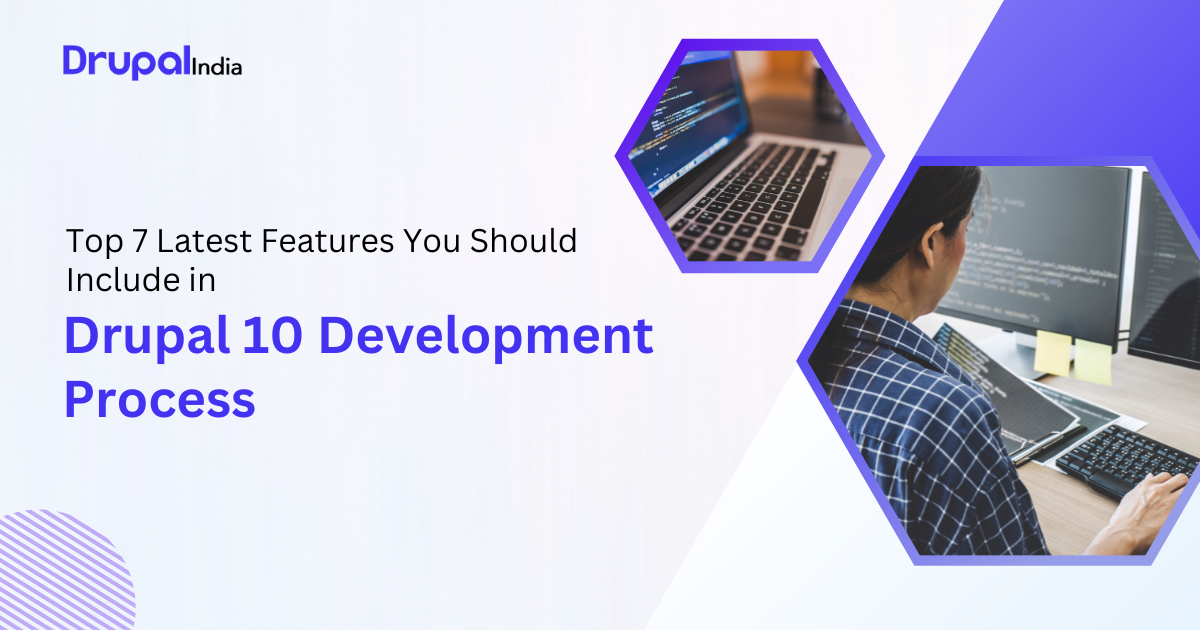 Drupal 10 was released on 14th December 2022 with Symfony 4 and CKEditor 4 support. To put Drupal 10 development another way, you will not get any more security updates or fixes for any issues that already exist.

The Symfony framework, upon which you will engage Drupal 10 development, serves as its operating system. There would be a significant amount of core and module work required if Drupal 9 wanted to update to a newer version of Symfony.

A more logical next step would be to develop a new, compatible version of Drupal that complies with the requirements of Symfony’s most recent release while also incorporating novel approaches and concepts, without having to worry about backward compatibility.

Like when we switched from Drupal 8 to Drupal 9, Drupal 10 will give us access to tons of new features. The release of Symfony 5.4 was the single most important change that spurred the creation of Drupal 10. Additionally, preparations for 6 are in progress because it needs PHP 8.1 at the very least.

Both the front end and the back end of the new Drupal will look very different. Making Drupal website development easier to use for those who are not familiar with our product was our main goal with this update. All of the features that enabled us to grow in the future were kept, though.

In contrast to earlier versions of Drupal, the new starter kit theme in Drupal 10 development will allow developers to modify their strategy for creating templates. Additionally, throughout the CMS, updated JavaScript components will take the place of jQuery UI components. 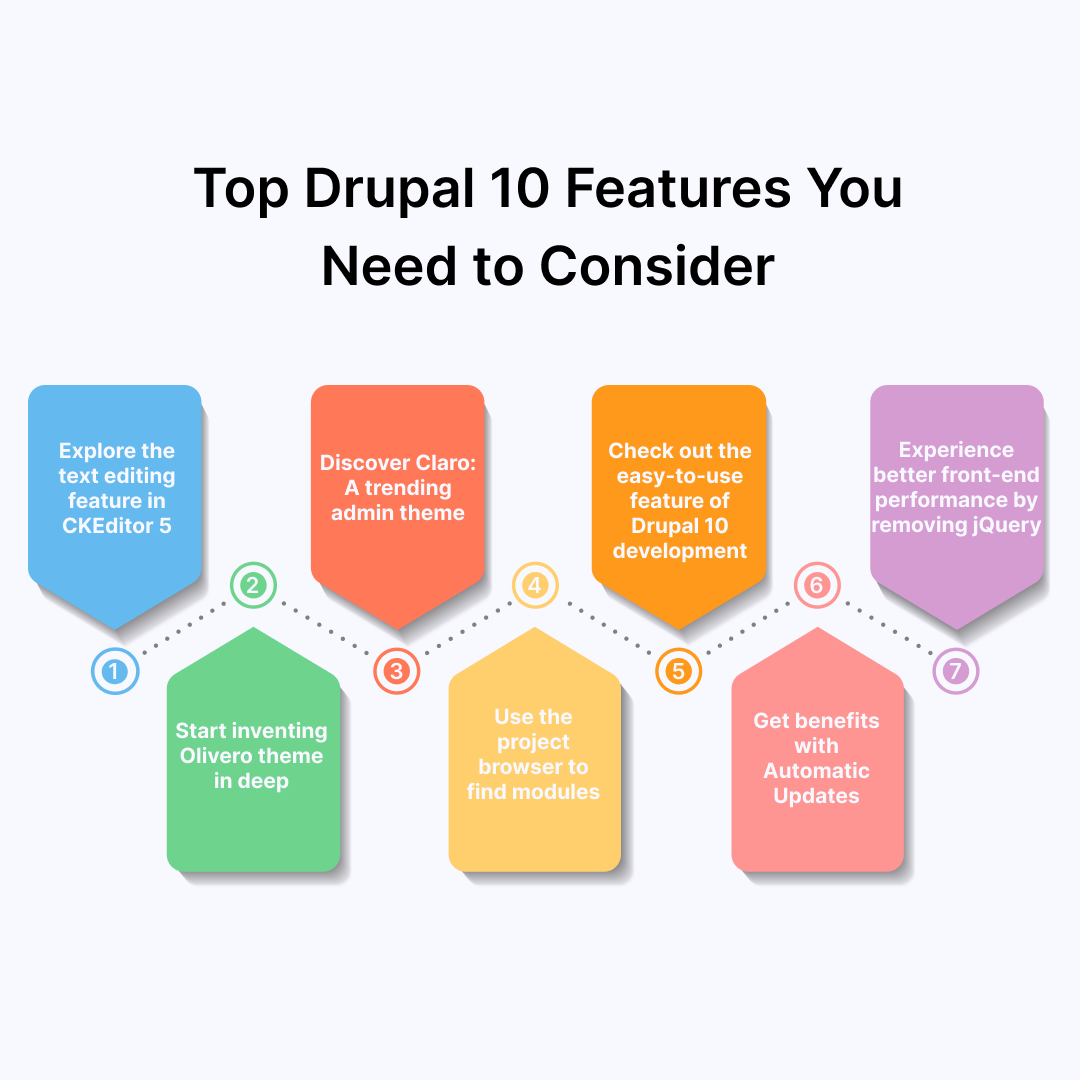 There is an upgrade from CKEditor 4 to CKEditor 5 with Drupal 10. Version 5 appears more upscale and contemporary even though the two versions are largely very similar. The interface has been made simpler, and in UX design, simplicity truly is the height of sophistication.

Version 5 is more touch device friendly than version 4 because it does not rely on right-click menus. There are fewer options than in version 4 for editing links and images in CKEditor 5. It is obvious that CKEditor 5 is more tailored to the needs of content editors than to those of site builders.

By giving Drupal a face and a brand, the Olivero theme performs the crucial task of representing Drupal to new users. The theme appears more contemporary than the one before it.

Olivero’s excellent accessibility features are wonderful to see given that Drupal core sets the bar for contrib. It has a clever dropdown menu system that makes sure menu items don’t vanish past the edges of the browser, unlike earlier Drupal core themes.

More significantly, Drupal 10 also includes a brand-new theme that you’ll actually use as a standard. The new admin theme is where you’ll spend a lot of time, whereas the Olivero theme is usually just used as a placeholder.

Claro is a significant improvement for Drupal’s user interface and overall appearance. The “Admin” theme is a welcome change from the “Seven” theme Claro replaces, which looks dated in 2022.

The project browser initiative is another project where Drupal is looking out for users who are small businesses. Your Drupal website now has an interface for finding and installing contributed modules and themes thanks to the project browser.

WordPress has had this feature for a while, but Drupal 10 development is making an effort to do a better job by automatically checking for dependencies and incompatibilities.

According to a UX research project, Drupal has the lowest approval rating among new users. The project combines the three modules—Media, Layout Builder, and Claro—that together introduce novice users to even more user-friendly software. These modules were present in Drupal 9, but they are now deemed stable enough to be enabled by default in Drupal 10.

Drupal has always had a contentious relationship with automatic updates. Small users don’t want to spend endless time and money on weekly updates for Drupal core and the numerous additional modules that are frequently added to a typical Drupal site, and big enterprise sites don’t want it either.

This project will not be finished in time for Drupal 10.0.0’s release. In terms of technology and achieving consensus within the Drupal community, this is most likely the trickiest improvement to Drupal 10 features to date.

Drupal is finally getting rid of jQuery. A front-end developer’s best friend for a very long time was jQuery. With jQuery, JavaScript became less intimidating and we were able to accomplish more with less code. As one might anticipate after 16 years, JavaScript has advanced significantly since the release of jQuery in 2006.

The majority of jQuery’s features have been incorporated into JavaScript, so it is no longer necessary. With jQuery gone, native functions will be able to handle a lot of the heavy lifting more effectively.

JQuery removal from Drupal 10 development is currently in progress. Before aiming for a complete cleaning out of jQuery code, the core team is prioritizing the removal of jQuery plugins that are simple to remove.

You can update the core of your website with patch-level updates thanks to the Automatic Updates contributed to the project, which is already stable. (Minor version updates and updates to contributed projects are supported experimentally.)

The Default Olivero theme is the release of CKEditor 5, which features more advanced authoring capabilities and modern editing replacing CKEditor 4. Some uses of jQuery will be replaced by contemporary JavaScript components. Tools in the theme starter kit for custom theme development.

What are the languages that Drupal is written in?

Drupal is written in two languages; one is JavaScript and the other one is PHP.

Looking forward to starting a project for Drupal 10?