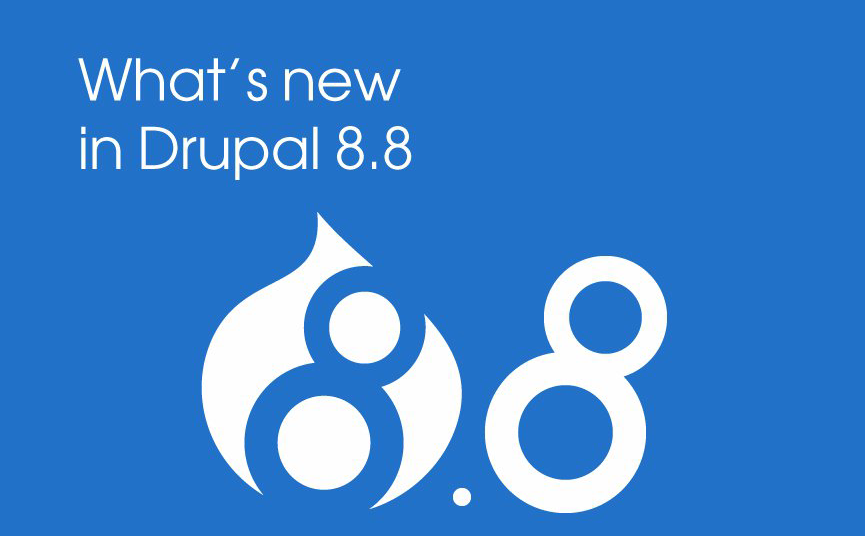 A number of major changes have been introduced with Drupal 8.8 latest release. The update was released in December 2019 and before the release of Drupal 9, it is a great move by the Drupal community. The release mostly focused on improving the management that will help the Drupal 8 developer in building a secure & smooth enterprise website.

Let’s have a look at the features of Drupal 8.8

This update is the much-awaited in this latest release. For website developers, this WYSIWYG integration is a decade long wait. The earlier poorly handled media embedding has become simpler for the content creators who wish to build and integrate the media embedding. Another benefit is that this feature comes with complete media management capabilities.

Claro is the latest Drupal admin theme with an improved look and better interface. On top of this update, the theme will bring a new refreshed design to Drupal 8. This UI change has been long in demand by the Drupal community. However, with the latest release, these requests are finally coming on board. The clean, concise and advanced look adds to the web accessibility feature.

The Drupal 8.8.0 update empowered and fixed the below issues:

This change is a big boost to the growing ecosystem of contributed modules and hence, the JSON: API can develop faster working and communication by removing the necessity for an ad-hoc code.

The composer has helped Drupal 8 development to become more streamlined with the PHP standards. The bonding between the Composer and PHP had started to build more with the Drupal 8 release. Now, Drupal 8.8 comes with more Composer plugins.

The new plugin will be in charge of automating the Drupal composer scaffolding in the right place. On top of that, this will offer a number of options for the setup approaches.

This plugin task is to eliminate some of the useless folders that are present in the vendor directories like tests or documentation. This is an important process when the vendor folder is comprised of the doc root.

This composer template helps in building the Drupal project structure which follows the suggestions presented in Drupal 8.8. These suggestions state that the vendor folder should be out of the doc root.

This template is used to generate a Drupal project that follows the old structure. But using this will not be suggested for Drupal 8.8.0 and further.

Websites can run properly with the modern browsers that support CSS and JavaScript. While some browsers are getting outdated with time. But with Drupal 8.8 release the browser policy has been changed.

It supports the latest release of browsers for both desktop and mobile browsers:

In addition to that the latest release is also supported by the desktop and mobile browsers:

6. End of Life for jQuery UI

In the method of switching to JavaScript solutions, the Drupal core is eliminating jQuery UI which allowed the developers to add experience components within the code. This collection of widgets is being eliminated for now and will be completely removed in the upcoming Drupal 9. The modules and themes dependent on it will have to search for a replacement contributed to the project.

1. How often does Drupal update?

Usually, Drupal releases updates on a monthly basis but when any security issue is observed an immediate release is also done. Make sure to enable the update status module and check for new releases every week.

2. Is Drupal front end or backend?

A Drupal developer is someone who codes in the PHP and other server-side languages. They code the custom modules, consume web services, automated tests, automate deployment, etc. They are also known as “backend Drupal developers”.

3. How long does it take to customize a Drupal website?

An enterprise-level website needs a lot of time to customize in comparison to the small websites. Overall the time required for the customization completely relies on the requirements and nature of changes required within the website.

Drupal is the first choice of developers and business owners who need to build enterprise-level websites. It is a powerful CMS that is not only open-source but also offers high-level features to maintain the online branding image.

5. What features Drupal 8.8 offer to developers?

Drupal 8.8 offers multiple features that were missing in the earlier versions and were in huge demand for a decade.

Drupal 8.8 update brings out a collection of features and quality of the life improvements that will definitely make the life of the site builders and content creators simpler. This release is an important release giving a clear indication for the arrival of Drupal 9. if you own a website or looking to build a website from scratch it is the perfect time to avail the services of this latest version. Drupal Development company can be consulted to build an engaging as well as secure enterprise website. They have all the resources to build, customize and migrate a Drupal website.